And DID those feet? Why I love the hymn Jerusalem

I personally love the hymn Jerusalem: we sang it at my wedding, and I certainly do not discourage couples from having it at their weddings. Those who do object to it  really havn’t thought about the lyrics. Those who bellow it out over the rugby field or at the Last Night of the Proms have completely missed the plot. Those who believe it is jingoistic simply aren’t listening.

I love Jerusalem because it is the most radical, subversive, challenging and iconoclastic hymn of all, written by a true radical with a Christian Social Conscience. It completely challenges the establishment which believes Jerusalem is their theme tune. Let’s look at the text…

And did those feet in ancient time
Walk upon England’s mountain green?

er… no. Jesus was not an Englishman. The presence of the question mark is the key pointer that it’s not going to be plain sailing in this hymn and it begins with an uncomfortable question, not a statement.

And was the holy Lamb of God
On England’s pleasant pastures seen?

er… no, again. The question further emphasises the first one. Two negatives in a row seems to be emphatic. The alliteration of ‘pleasant pastures’ is particularly pleasing and I believe used in an ironic context, especially when considered in the light of the end of this verse

And did the countenance divine
Shine forth upon our clouded hills?

Guess what? No. Again. Even the clouded hills have been a little countenance-starved of recent years. This is an allusion to the appearance of YHWH on the mountains of Sinai to Moses (Exodus 34:5; Exodus 40:34). But it happened there, and not in England. Blake is pushing his point now.

And was Jerusalem builded here
Among those dark satanic mills?

Most definitely not. Clearly dark satanic mills are nothing to be celebrated. They are in complete contrast to clouded hills and pleasant pastures and yet so much a part of the (then, before Thatcherism) English landscape. This first verse is therefore not a jingoistic celebration of all-things-English but a critique of that attitude and an indictment of the state of the nation. So things are rotten, what can we do about it…?

You need the right equipment if you’re going to battle the evil in this world. As a sensualist, Blake clearly felt that passion was important. It’s a God-given grace to be passionate about things, and right to battle against the insipid and the bland.

I will not cease from mental fight,
Nor shall my sword sleep in my hand,

The conversion of England is both a spiritual and a practical quest. It is a mental fight, but requires action and possibly even revolution if the denouement of the hymn is to take place. Is Blake calling for fighting in the streets like the Rolling Stones?

Till we have built Jerusalem
In England’s green and pleasant land.

It’s a challenge. It’s not here yet. It looks to a future, with a radical edge.

And, that, my dear friends is why Chris Bryant is completely wrong, both factually and spiritually: Jerusalem is sung often in Church but not for the reasons he thinks, and not for the reasons that many are thinking they are singing. It is a call to radical action, to social change, to Christian revolution and I will continue to have it sung in my Church.

Wikipedia Entry on the Hymn: http://en.wikipedia.org/wiki/And_did_those_feet_in_ancient_time 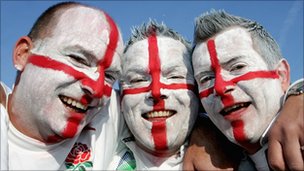 Lex Orandi, Lex Credendi – think about what you are singing!

No comments so far

I love Blake in general and Jerusalem in particular.

“At the time of its conception Blake was awaiting trial for supposedly making insulting remarks about the king and praising Napoleon to a soldier.”

It is a great socialist anthem. My suspicion is that the Dark Satanic Mills refer to Oxford and Cambridge and represents the entirety of the establishment.

Thank you for articulating this better than I could have managed!